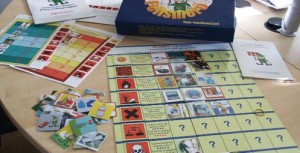 Board games, colouring books, stories and cards – all to teach children about hazard symbols and chemical safety in general. A programme developed by local chemical safety inspectors in Hungary has become extremely successful, involving 3 500 children, their parents and 200 teachers over recent years.

According to the annual report of the National Institute of Chemical Safety, children are involved in up to 20% of human poisoning cases in Hungary. Therefore, chemical safety inspectors in Somogy County, in the southern part of Hungary, started a new prevention programme aimed at nursery schools to avoid accidents with chemicals. The programme – called ‘Learn it! – Beware of the risks!’ – was the inspectors’ own initiative planned outside work time.

The programme was extremely well received on the annual Chemical Safety Day organised by the national competent authority; its popularitys exceeding the work on water pollution, endocrine disruptors and enforcement practices.

The Hungarian inspectors contacted nursery schools to establish a partnership. The aim was to familarise children with hazard symbols and their meanings. The programme also involved parents, providing them with useful information about key questions like how to store and use chemical agents.

A whole collection of educational materials was developed by the inspectors to promote the initiative including posters, educational stories and nursery rhymes, board games and interactive sessions. The purpose was not only to teach children something new but also to focus on the knowledge that they already have.

To measure the knowledge of the children before and after the lessons, the inspectors used a test sheet with eight exercises to be filled with stickers. Before the programme, the children got on average only two or three answers correct. They typically recognised the symbols indicating toxic and environmentally hazardous chemicals. Three weeks later, when the programme had finished, the children were able to correctly answer at least six or even seven questions out of eight.

Chemical safety education helps children to recognise danger as well as making them more aware of health and environmental hazards. Education also helps children to recognise the importance of risks posed by chemicals. Furthermore, not only is the initiative important for the children, but even the kindergarten teachers said that it is very useful to get to know more about toxicity and the safe use of chemicals.

The ‘Learn it! – Beware of the risks!’ initiative won the United Way Hungary’s Safety Award in 2010 and was further developed for elementary school children by the colleagues of the health authority in another county. However, further success of the programme will depend on the availability of financial resources.